Nocturnal Transmission is an album written during October 2020. It’s a bit of a love-letter to late 90s/early 00s ambient techno/breaks with a distinctly late-night/early-morning feel, and includes a 1 hour DJ-style mix for continuous listening (which is how it was intended to be heard). You can download it from Bandcamp in the format of your choice, or alternatively it’s on most major streaming platforms right now.

I thought I’d take this as a little opportunity to talk about how the album came about and how it ended up getting the release it did. Every year-or-so I have a bit of a tradition of writing as much music as I possibly can during October – it’s always been a fun creative exercise, and sometimes acts as a much needed creative binge between other projects. This year I figured I’d give it a miss as I figured I had that particular creative outlet covered with my live-stream music-making sessions. 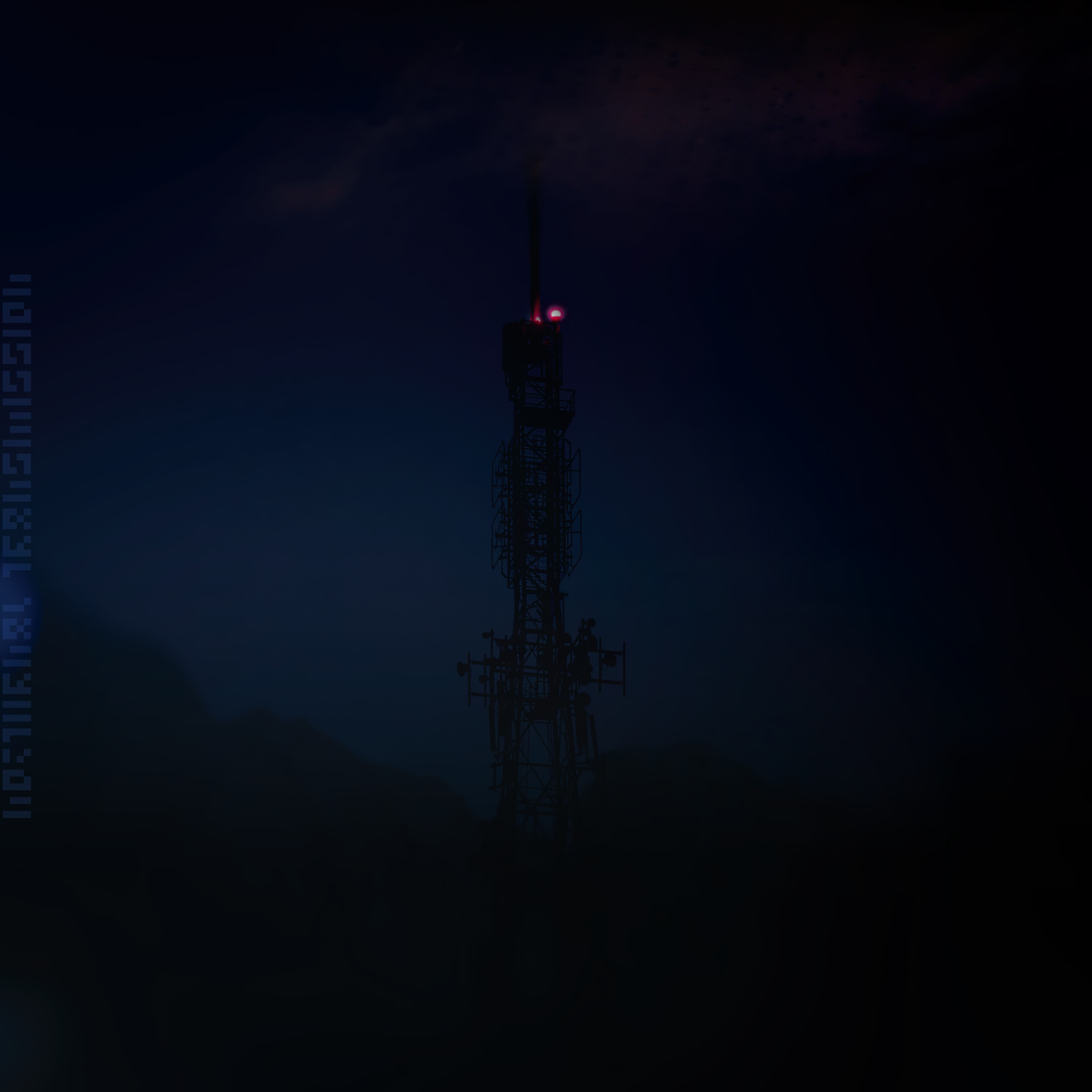 Around November last year I had gone on a bit of an ambient techno/d&b binge, listening to tons of music by the likes of The 7th Plain, Nail, and Baraka (I also listened to a lot of music by Sasha but that’s pretty much a steady constant these days!). As we approached a similar seasonal feel this year I thought it’d be fun to try writing something in that style – it’s actually something I’ve long wanted to try out, but it’s a vibe I’ve never really been able to fully nail down. I ended up writing the first of what would turn out to be many tracks, Silhouette, using a lot of techniques familiar to anyone who has watched my live-streams but with a sonic palette more appropriate to the era in which I was referencing. It felt so good to work towards a somewhat familiar sound while putting my own spin on it, and I quickly fell into a bit of what I’ll refer to as a creative flow-state.

Over the course of the month I decided to keep revisiting that feeling with no expectations or end goal in mind. Urged on by friends who seemed to “get” what I was going for, I started playing around with mixing the tracks into one continuous mix as I went along. The entire process of creation was a purely self-indulgent exercise – I was enjoying the process, and I was really looking forward to giving it a proper spin when it was “finished” in November! It’s a rare thing to hit such a readily-flowing creative vein so intensely like that, so I really wanted to make the most of it. Lots of lengthy production sessions ensued in which I just kept working on tracks with no real concern about how I was putting it together – I just wanted it to match that November mood I had already established in my head.

Once I’d completed the 12th track (Lucidity) I decided to call it a day and move on. I felt like I needed a break from this particular excursion, and I wanted to quit while I was still enjoying the process. At this point I decided to put together a master and look at sorting out some cover art – even at this point I didn’t really have any real intention to give it a “proper” release, I just thought it’d be cool to have a cover to go with it! I figured I’d leave it for a bit, then decide what exactly to do with in terms of releasing it should I decide to do so – there was no rush, it was just a fun thing that I’d worked on during October.

After a short amount of time listening back to the album I realised that I did in fact want to release it. There was something about the overall feel of it that I just really wanted to share, regardless of my initial intentions or how it would be received. I already mentioned that the entire project was purely self-indulgent, but I think there’s a kind of playfulness to that which I wanted to strike while it still felt fresh in my mind. As such, I released it immediately to my Patreon supporters and Bandcamp subscribers while working out a release through Spotify et al.

And that’s the story of how I ended up accidentally writing an album in October. In recent years I’ve very much become a fan of seizing spontaneity and making the most of prior experience, and given the swift production and release cycle the whole thing still feels incredibly new to me. It has a sort of directness that I’m not accustomed to experiencing with my releases, and the short turnaround made any sort of concerted promotional effort kind of redundant on my part. It is what it is, and it feels great to be sharing such a recent expression of myself with you in this way. I’d love to talk more about how the album was put together from a more technical perspective, but for now I just hope some of you enjoy it.

Nocturnal Transmission is available NOW through Bandcamp. You can listen to it in its entirety and download it from my Bandcamp page. Bandcamp subscribers and Patreon supporters also get access to an exclusive audiophile master. It’s also available to stream & download from a wide variety of digital distribution outlets.

Unforgotten is a new album of works written & produced from 2016 – 2019, and it’s available to download right now in the format of your choice via Bandcamp.

“Unforgotten” is a collection of previously unreleased music by UK-based musician & producer Adam Fielding, written & recorded during 2016-2019, and released in March 2020.

Originally starting life as a series of demos written in late 2016, “Unforgotten” is an album that revels in contrast and spontaneity. Drawing on themes of introspection and change, “Unforgotten” is a vibrant blend of intricate electronics and live instrumentation drawing from a wide variety of influences and inspirations.

From the affirming, guitar-soaked opening of “We Will Find Our Way” through to the playful electronic washes of “Sunset Wonderland”, “Unforgotten” is an album that refuses to stay in one place for too long, celebrating playful expression while retaining a strong emotional undercurrent.

Unforgotten is a project I’ve been meaning to finalise and release for quite a long time now. Given the current situation with COVID-19 and several countries placing their populations under lockdown, I figured the most positive thing I could do would be to stop messing about and just release it. So I did.

Originally starting life as one of my October Sessions-of-sorts back in 2016, it was the last project I worked on before relocating my home studio. As a result, it always held a bit of a special place in my heart – I vividly remember writing and producing most of the original demos with a lot of my equipment packed up in boxes, getting ready for the big move. Those original demos were rough around the edges, but over the coming years I kept visiting and re-visiting them time and time again, chipping away at the edges to try and come up with a more well-rounded album. Mixes were tweaked, elements were re-recorded, and tracks were swapped in and out. It was only in late 2019 that I landed on what I considered to be a “complete” album, but even then I was incredibly apprehensive about releasing it – a lot changes in four years!

Due, I suspect, to its spontaneous nature, Unforgotten relies more heavily on acoustic/live instrumentation than my more recent releases. In a way I’d say it works as a sort of companion-piece to Pieces in the sense that both weren’t originally envisioned as “albums” as such, that’s just kind of the way they turned out. Both albums started life as a rough series of tracks that were rotated in-and-out with an on-going series of compositions, and both were endlessly fiddled with as they started to take form. In much the same way that the old 2016 Unforgotten demos sound quite different to the final album, the original 2012 version of Pieces sounds rather different to the released article.

(speaking of demos – if you’re a Bandcamp subscriber, I’ve included the original 2016 demos as a bonus if you fancy comparing the two!)

I must admit that it’s a nice change to just launch an album into the wild (as I write this I’m still sorting out digital distribution through Spotify/Apple Music/et al), though I wish the circumstances that precipitated it weren’t quite so awful. Perhaps at some point I’ll write a little more about the processes involved in writing and producing it. Who knows!

I hope you enjoy the album, and I really hope that one or two of you find some amount of connection or comfort in there.

Stay safe, and here’s hoping things get better sooner rather than later. Cheers.

October Sessions is my latest Bandcamp exclusive release. If you’re already a subscriber, you can download it immediately in the format of your choice. If you’re not, then I’d say with three albums, one single, and a ton of other exclusive goodies in the bag that now is a pretty damn good time to check it out! (this reminds me, I really ought to upgrade that crappy video at some point)

October Sessions is an album consisting of previously unreleased tunes written and produced entirely during October 2014.

I’m really happy with how this particular release turned out, though between Pieces, Obscurer, and The Broken Divide all coming out between 2014 – 2016, I never really felt like I had an opportune moment to release it… until now!

As with Traces, I’ve also put together a preview mix for non-subscribers if you want to get a feel for the album in general.

On a related note, I may or may not be continuing my October Sessions tradition this October due to some pretty big circumstantial variables (i.e. “I might be moving house & studio”), but it’s something I’d really love to re-visit again and see what pops out. I guess we’ll just have to wait and see what the future holds 🙂

I’ve been focussing on writing a lot of production music this year, which has seen me trying out some heavier styles than I guess you’d typically associate with me – it’s been a ton of fun to work on those, and I’m looking forward to seeing where those tunes end up.

I’ve also had a few people asking me about my lack of live streaming lately – I haven’t given up entirely on those, but I’m afraid I’m going to have to give the usual “I’ve been quite busy” excuse with regards to why I haven’t done any for a while now. It’s definitely something I’d love to get back into – right now I feel like I should at least do one final live stream from my current studio before I move, but I’d like to get moved and re-settled before I really get back into those.